“It’s time to care,” Laura Weeldreyer, the executive director of Maryland Family Network, said in front of the Maryland State House, to a crowd of supporters of statewide paid family leave, which included a few lawmakers and two gubernatorial candidates. “Families have to juggle many demands on their time, but none are more important than their responsibilities to their children.”

The Time to Care Act, sponsored by Sen. Antonio L. Hayes (D-Baltimore City) and Del. Kris Valderrama (D-Prince George’s), would allow all Marylanders, both part-time and full-time employees who have worked 680 hours in the past year, to take 12 weeks of paid leave following childbirth or to take care of themselves or a family member experiencing serious health issues.

Depending on their salary, workers would receive a partial wage replacement of between $50 and $1,000 a week.

The program would work by establishing a statewide family leave insurance program, which would include contributions — split evenly by an employee and employer — up to 0.75% of an employee’s wages. Legislative analysts estimate that annual revenue into the insurance pool would reach $1.8 billion by 2027. 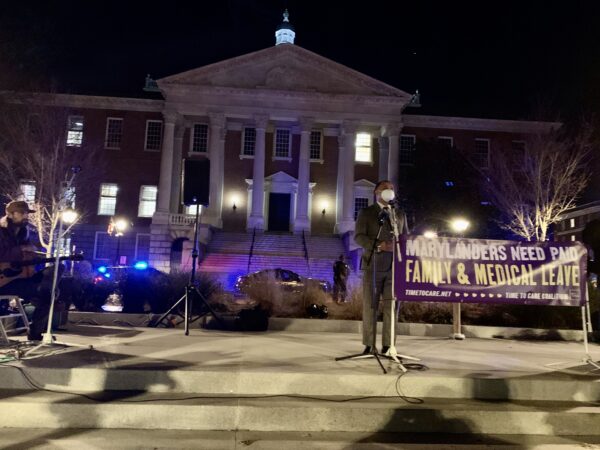 Sen. Antonio L. Hayes (D-Baltimore City), the sponsor of the Time to Care Act that would offer paid family leave to all Marylanders, spoke to a crowd of supporters Monday night, pushing the legislature to pass his bill his year. Photo by Elizabeth Shwe.

Growing up, Hayes said his grandmother stepped in when all other safety nets fell through. “My situation isn’t unique to many Maryland families who have to make a decision on whether or not to work or care for the ones that they love,” Hayes said Monday evening. He urged both legislative chambers to bring the bill to a vote in their respective committees soon.

This is the fourth time paid family leave has been introduced in the General Assembly in recent years. A bill didn’t make it out of committee last year, but advocates contend it is a popular policy among voters of both parties. Opponents have argued that paid family leave would be too costly for employers, especially small business owners recovering from the COVID-19 pandemic.

The Time to Care Act was heard by the Senate Finance Committee and the House Economic Matters Committee earlier this month. The Business Regulation Subcommittee is expected to discuss possible amendments to the bill on Friday morning, according to Myles Hicks, campaign manager for Time to Care Maryland.

Supporters say that paid family leave will improve the well-being of both parents and babies by allowing new mothers to recover while maintaining job and income protection. Studies have shown increased participation by women in the workforce in states that have paid family leave. So far, nine states and the District of Columbia have enacted paid family leave policies.

In a 2022 poll of 1,077 registered voters by Maryland Rise, contracted by the Time to Care Maryland coalition, 88% of voters who responded favored creating a paid family leave program, including 94% of Democrats and 77% of Republicans. It had a 3-point margin of error.

Peter Witzler, who works with Progressive Maryland, said that paid family leave enabled him to care for his six-year-old son, Jackson, who was born with spina bifida, and “give him the best chance that he needed to grow into the strong-willed, independent happy healthy six year old that he is right now.”

But opponents of the bill argue that another fixed labor cost is a heavy lift for small business owners, who cannot afford to have an employee gone for that long. They also raised concerns that the bill could strain businesses’ ability to meet long-term financial obligations.

An average weekly contribution would be around $7.04, split equally between the employee and employer. The more an individual earns, the more they and their employer must contribute to the fund — up to around $9.47 each, according to Clinton Macsherry, director of public policy for Maryland Family Network. Currently, the responsibility of paying for paid family leave falls on the employer, who cannot always afford it.

“That is not a small amount of money,” Mike O’Halloran, the Maryland state director of the National Federation of Independent Business, told the Senate Finance Committee earlier this month. Small business owners would do a lot to accommodate the needs of their employees but not “when it’s shaped and required in such a one size fits all manner” as the Time to Care Act, he said.

Instead, businesses would benefit from improved infrastructure, access to broadband and affordable health insurance that they can offer their employees, he testified.

Advocates contend that the Time to Care Act, which splits the cost equally between the employer and employee, would make paid family leave more affordable to small business owners who previously could not afford it. Offering paid family leave will reduce staff turnover and increase worker productivity, advocates said.

Advocates on Monday evening came prepared with stories from small business owners who support the bill. In a statement read by Weeldreyer, Ryan Nellans, who owns the Berlin Sconer, a bakery on the Eastern Shore, said the Time to Care Act would will “rectify the disproportionate negative impact of low wages on at-risk individuals and families.”

“You know who works in businesses?” Weeldreyer said. “People. People who will at some point need paid family and medical leave.”

“I think there’s a growing realization that paid family leave is a moral obligation of the state, but it’s also good for businesses,” King said in an interview. “Paid family leave and universal quality childcare together are essential to producing an economy that is more just, particularly for working women.”

Sneed said that she believes the General Assembly has the votes to pass the Time to Care Act. “It’s just — the governor needs to sign it. The support is definitely there,” she said.